China built a tower that acts like 'the world's biggest air purifier,' and it actually works - Maker Faire Rome
Skip to content The smog tower project was launched back in 2015; the purpose of the project was to find an effective, low-cost method to artificially remove pollutants from the atmosphere.

As authorities in China seek ways to tackle the nation’s chronic smog problem; the tower –  dubbed the world’s biggest air purifier by its operators – seems to offer a valuable solution. The tower has been built in Xian in Shaanxi province: Xian can experience heavy pollution in winter, with much of the city’s heating relying on coal. The tower works through greenhouse covering about half the size of a soccer field around the base of the tower. Air is sucked in and heated up by solar energy; the hot air then rises through the tower and passes through multiple layers of cleaning filters.  The tower requires little power to run throughout daylight hours.

The tower is currently undergoing testing by researchers at the Institute of Earth Environment at the Chinese Academy of Sciences: more than a dozen pollution monitoring stations have been set up in the area to test the tower’s impact. Scientists say they have seen improvements in the air quality over an area of more than three square miles in the past few months. Results are, in fact, so far encouraging: the average reduction in PM2.5 – the fine particles in smog deemed most harmful to health – fell 15 percent during heavy pollution. 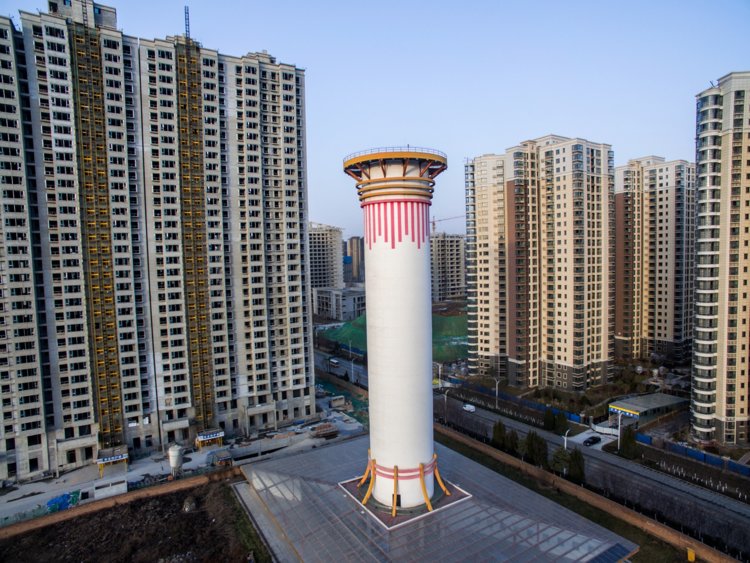 A number of locals say they have noticed a difference in the air quality, even during the winter when the city is especially prone to pollution.

Scientists say the results are just preliminary, as the experiment is still ongoing. The team plans to release more detailed data in March 2019 with a full scientific assessment of the facility’s overall performance.